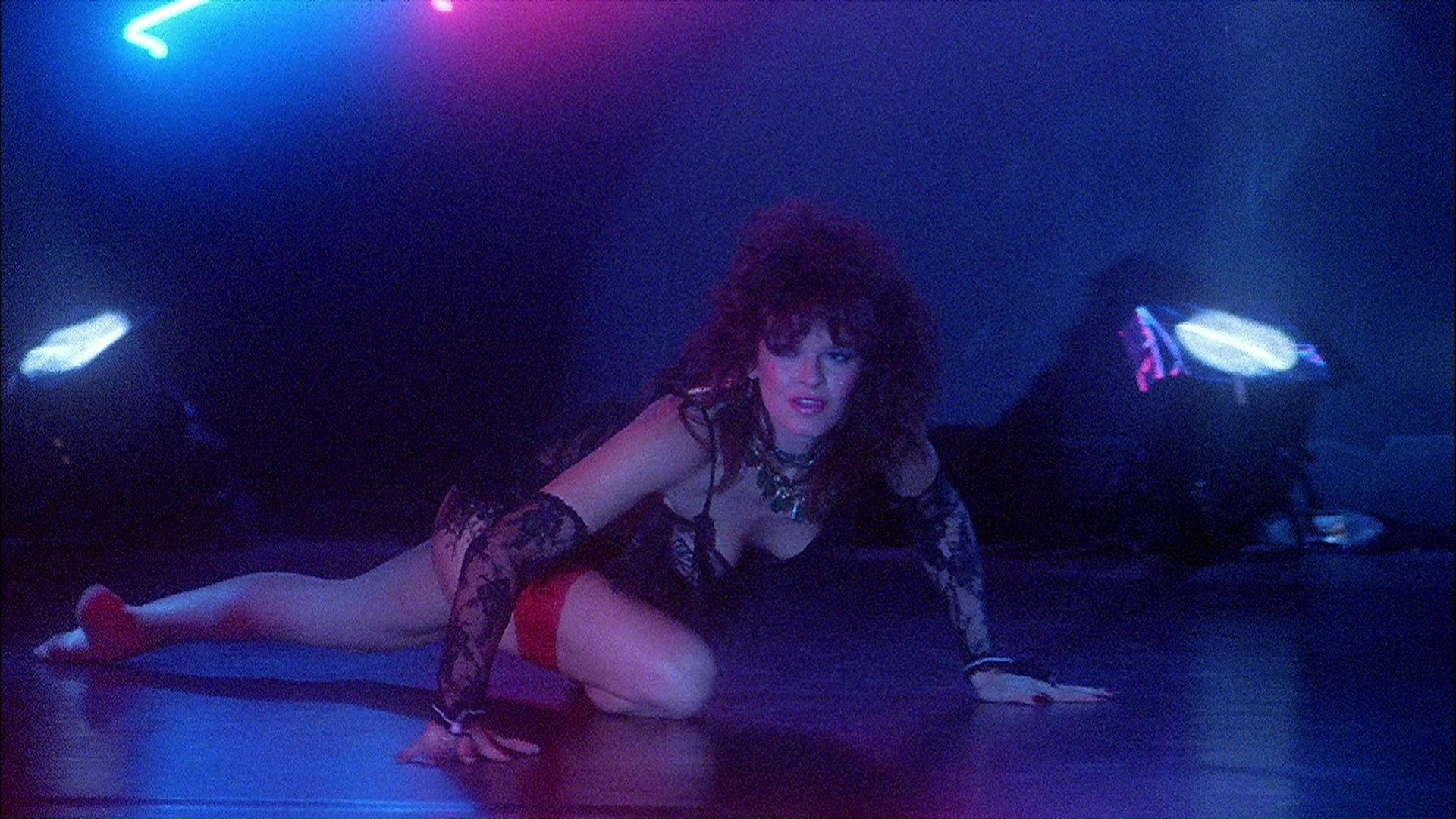 Strippers, slashers, strippers getting slashed, all of these things seem like a surefire way on paper to make a film a guaranteed good time. Stripped to Kill manages to bungle all of this somehow into a barely watchable slog of a film (which is hard to believe since it does indeed feature the three previously mentioned ingredients.) Once I saw Roger Corman listed during the opening credits I thought “hey this might not be half bad at all,” but unfortunately Stripped to Kill is definitely not a good film and sadly not even a very good sexploitation romp through the seedy world of the Skid Row strip clubs. The film opens with a painfully long striptease (which is something no self respecting man should ever need to write) set to some of the most godawful eighties music I’ve heard in a very long time. I’m not totally sure but it definitely felt like I had to watch the lady dance to the entire fucking song! It then cuts to a leather jacket wearing punk who looks like Rufio from Hook spying on his lesbian sister and her girlfriend and giving off major this-will-become-important-way-later vibes. We cut back to some stripping, more awful eighties music, and a plot about some psycho slashing strippers to pieces. To save the day, detective Cody (Kay Lenz) must go undercover as a stripper and flash her tits around until the criminal is brought to justice. 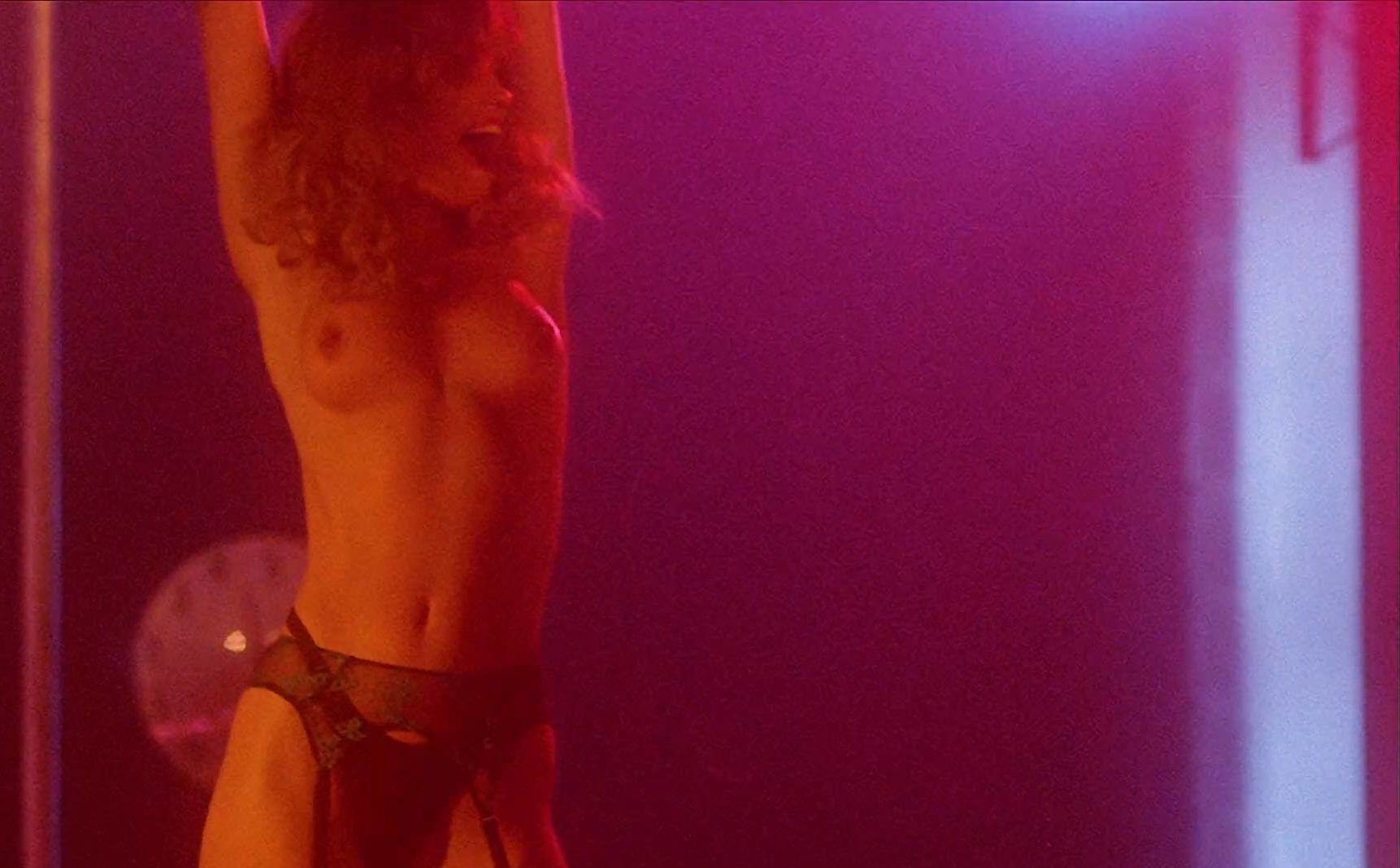 The plot (or what exists of one) is sort of a slasher/giallo hybrid with pretty ladies getting cut up by some psycho and a detective who has to crack the case before more people die. Unfortunately, this mystery has no immediate bite to it and the stakes never feel very high. This is a strictly paint by numbers affair when the plot rears its head and it couldn’t be a whole lot more uninteresting. I say when it rears its head because for what it’s worth, if you were to edit out all of the stripping parts of the film, this thing would only be like thirty MAYBE forty minutes long. Yes, there is a lot of stripping and I appreciate that most everyone in the cast shows some skin. However, this film falls into an eighties pit of garish lighting, bad music, and being almost completely devoid of actual eroticism. The cinematography and framing is bad. The lighting is washed out and dull, the sets are lifeless (they must work at one of the least exciting strip clubs ever put to film), and the film lacks any sort of stylistic achievements. The worst offender in this department of things is definitely the editing. The editing is shoddily taped together and really lacks any sort of cohesion at best and at worst devolves into a mess of confusion. The acting is also bad but it isn’t probably as bad as it could have been. The dialogue is shit to be sure, but the main leads and even a few of the bit players give at least a enough of an effort to deliver their flat lines with some sort of conviction. Lenz in particular does her best to salvage whatever dignity she has going for her career here so kudos to her. The soundtrack for this one is mind-numbingly awful. A bunch of low (and I mean LOW) grade eighties songs that last for what seems like an eternity and are noticeably bad the entire time. I can’t really stress this enough, this is definitely one of the worst soundtracks I’ve heard in a film in a LONG time. Unless you’re some kind of super fan of terrible cheesy eighties D grade strip club music, I can pretty much guarantee you’ll hate the soundtrack too. The effects are minimal (thank god) and they don’t look good; that’s really all there is to say about that (although tying a dead body to the bottom of a semi-truck and letting it get drug for hundreds of miles is a fairly badass thing for a slasher killing). Stripped to Kill is a bad film, it’s a dumb film, it’s an ugly film, but most of all it’s an uninteresting film and that’s one of the worst things a film can be. The only reason I could recommend this would be for the nudity and the stripping if that’s up your alley, but even then there are much better films in that vein as well and unless something about Stripped to Kill is specifically hot to your tastes, this one is totally skippable.